skip to main | skip to sidebar

Down to 219 pounds again; This is the weight I got down to back in September 2008 on medifast. But when I came off that, I failed to transition to real food as I was supposed to, so between then and now, I went back up to at least 300 (gained and lost 80 pounds) and now back down again.

At this point, however, I'm in a much better spot than I was then; I'm comfortable with what I'm eating, haven't plateau'd yet, not exercising (aside from that one hike). I remember being a little freaked out last time, but now I'm looking forward to breaking 200, and I'm pretty sure I can do it before the holidays.
Also, I managed to hit all three goals in one day today: tied the 219 low, squeezed under 100kg, and edged out the BMI from obese down to overweight.

For fun, go google "What weighs 80 pounds". I found: A dishwasher. Post your finds in the comments.
Posted by Coke at 9:59 AM No comments:

Hey, this wagon, it looks familiar!

If you follow me on Twitter or Facebook, you've been swamped with a bunch of runkeeper posts about walks. I've walked at least a mile every day since August 24th, 2014; In the last 30 days, I've walked 79.1 miles, including a 10.5 mile walk this weekend.

I was thinking I was getting close to my lowest weight from back when I was on medifast; I hit 246 lb. this weekend.

Going back through the blog, though, I see I was down to 219 at some point before I stopped blogging regularly. That means I'm a little under 30 pounds left to get to my lowest ever. It also means I put on EIGHTY POUNDS after stopping medifast. I had gotten back up to nearly 300.  That's almost 3 bars of gold. Can you imagine carrying that around if you didn't have to? Ugh.

So, I've done a bit to get back down this far; the last few months has been a slow drop but a ramp up in exercise; just walking, but it's simple, I can't screw it up, and it's having a positive effect. I've done it long enough it's a habit, and I am loathe to break my streak.

I'll check back in a few weeks.

So, back on the wagon.

Got a new diabetes educator who suggested some changes to my medicine regimen. Logging  everything I eat -- which by itself forces me to be more careful about what I'm eating, even if I'm not actively picking the best foods.

Walking a few days a week. Waiting on the gym until school is out so I can more easily work it into my schedule (also helps me ramp up with the walking instead of jumping in full steam)

Doing 100pushups.com's regimen for pushups again. Finally made it back up past week one day one.

Why are you still here?

So, I've fallen off this wagon quite a few times now since the original diagnosis almost a decade ago.

Depressing to look back over the tags and see that I was doing medifast four years ago, and trying to run two years ago.

So, I got back up to nearly 290 pounds, stopped exercising, avoided the doctor, and managed to get my A1C almost back in to double digits.

So, I finally slunk back to the doctor, who gave me the appropriate amount of crap and put me on a new drug, Victoza. I'm in the middle of the second week of it now, and its side effects (lack of appetite, nausea) are both about as fun as you'd expect.

Doc assures me that the nausea will pass (yay) but the appetite suppresent is amazing. I not only am not hungry, the thought of eating something doesn't really hold any interest (whereas two weeks ago, it would probably have resulted in getting a snack.) I'm wondering if this will slow down (and how fast), as I've heard the stomach staple does eventually. I'm sure some of this is just being mindful, but it really is an amazing difference.

So, without adding back in exercise yet,  my sugar levels have dropped down to normal; every day that I have a good fasting sugar in the morning, I take off a few units of insulin that night; in the next few weeks, I'll be off the insulin entirely (if this trend continues), and after that, Doc's targeting the actos.

I've dropped about 8-9 pounds in the past 12 days or so, due entirely to food intake.

Anyone out there using Victoza and getting similar results?

Hello, faithful readers. I am still fat and diabetic.
A month ago, a friend of mine at work suggested I run in a 5K this August, so I took him up on the challenge. I've been running* 3 days a week for 30m for the last month. Not quite couch to 5K, but in the same ballpark. Yes, I have special running shoes.
Today was the first day I've done this that I was able to get up to 5mph 3 different times during the 30m; Ended up going 1.6 miles in 31 minutes; I actually feel GOOD after the workout today, a welcome change. ^_^
I have a regularly scheduled doc visit in a week or so, and will bounce the sanity of this idea off her.
Now that I've been doing this for a month and made a (annoying, sweaty, and painful) habit out of it, next up is fixing my diet. I never transitioned properly off the medifast - so I did a great job losing the weight, but not keeping it off. My plan this time is to use the MF for snacks & backup, but to stay with real food as much as possible.
* Another runner friend of my says "Why not just walk". Trust me, that's basically what I'm doing at these speeds. =-)
Posted by Coke at 10:38 AM 2 comments:

Back on the wagon.

So, apparently you can't just ignore your diabetes and make it go away!
After getting under fairly decent control and off the insulin and dropping 50 pounds, I took some (too much) time off from keeping an eye on it, and it got out of control again.
Had a doc visit today; back on the insulin, upped the sugar meds, need to watch what I eat, start going back to the gym. About 20 pounds to get back down to my low.
*^&#$#@$!
Posted by Coke at 6:39 AM 1 comment:

I don't know what to make of this: You can buy the awesome Dr. Horrible DVD at the local grocery... 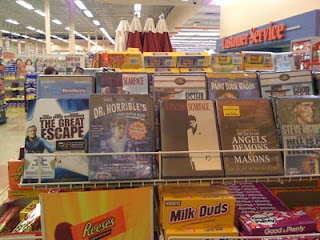